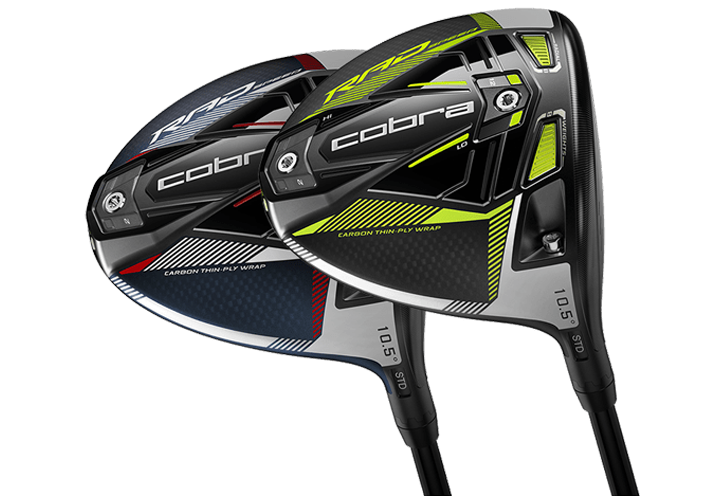 Cobra Golf’s 2021 launch of the RADSPEED Drivers, Fairways, and Hybrids promised innovation and they certainly delivered. With a name inspired by its key, innovative technology, Radial Weighting, the entire line is aimed at maximizing performance for the full spectrum of players through optimized weighting and an array of advanced technologies.

COBRA’s engineers discovered that by increasing the Radius of Gyration and the distance between the front and back weights, they could create the perfect blend of fast ball speed, low spin, and forgiveness in one driver.

Utilizing Radial Weighting, the weight is strategically positioned in each of the three new driver models, creating three distinct performances.

(2) the RADSPEED XB for players who want distance through faster ball speeds and consistency across the face in the form forgiveness and stability,

(3) the RADSPEED XD for those who want distance while reducing their slice or creating a draw.

COBRA’s proprietary CNC milling process is a significant advancement over the traditional hand polishing method and produces thickness and bulge and roll tolerances that are up to five times more precise.

Personalized custom performance doesn’t stop at just drivers anymore. The biggest names in the business have now identified three products are needed to best fit golfers for their driver, so it's highly likely those same players have similar needs when it comes to fairway woods.

Focusing on the weight savings from a thinner Carbon Crown design, COBRA engineers were able to free up more discretionary weight to position it forward and increase ball speed. Each fairway features COBRA’s signature Baffler Hollow Split Rails, which promises to increase flexion on the leading edge by 70% to increase speed while not compromising turf interaction.

The RADSPEED fairways come in three families which include RADSPEED, RADSPEED BIG TOUR and TOUR, and RADSPEED DRAW.

By increasing the distance between the front and back weights relative to the CG, Cobra created the optimal combination of low spin, and faster ball speed while maintaining forgiveness with the RADSPEED fairway. The RADSPEED fairway features a traditional shape with a balance of front and back radial weighting to deliver low spin, with high launch for maximum distance and improved stopping power into greens.

To see what some of our customers thought see below.  Or if you would like a recommendation please email us.  Or go here to purchase.  As always everything we sell is fully built to spec in house.

"If I can hit it down the middle of the fairway, that’s great, but with the driver right now, the driver sucks. It’s not a good face for me, and we’re still trying to figure out how to make it good on the mis-hits. I’m living on the razor’s edge, like I’ve told people for a long time.”

"I’ve been a fan of Cobra fairway woods for quite some time. When I decided I wanted a 5 wood I knew it would be a Rad Speed. I bought the Red/PeaCoat and visually the head is very good looking. At address the head sits square to slightly open to my eye, which I like. I’ve always found Cobra woods to be easy to hit. The Rad Spees is no different. Very easy to get the ball up in the air. The ball flight is what you want out of a 5 wood. High enough so you can get aggressive with greens and have plenty of stopping power because of the descent angle. I’ve always appreciated the rails Cobra have on their fairway woods. They do help get the head into and out of bad lies. Divots, deep rough, etc. There’s a confidence factor with those rails that you can get after a ball in a bad lie and still get the head onto the ball.  For me there is, anyway.

Which brings up a point. You really need to try this head on actual turf to truly appreciate it’s performance. Hitting off a mat indoors only tells part of the story. The rails feel “funny” on a mat. You can feel them drag when addressing the ball on a mat. That may bother some and cause them to try a different head. Which is really unfortunate."